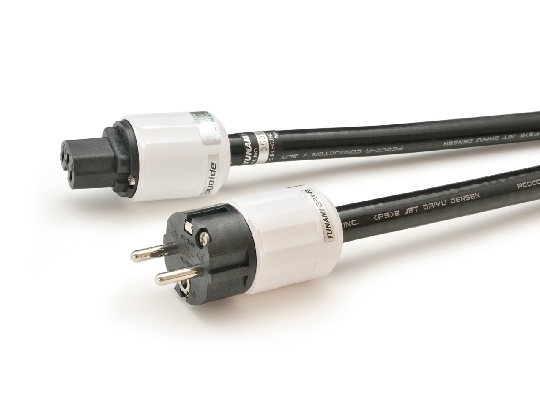 The first big wave of the TUNAMI power cable made a huge impact to the audio scene and it came to be recognized widely among audiophiles, sound professionals, foreign users and even audio beginners.For the TUNAMI GPX-R, P/C-004 special edition, equipped with "Aspirin Snow White" cover, is attached in order to fully extract the superior potential of TUNAMI power cable. TUNAMI GPX-R is created as a result of the collaboration between high-performance power cable and power plug/connector.

TUNAMI is a powerful, high-speed and dynamic power cable of a new generation. The short-pitch stranded PCOCC-A wire which has 5.5sq cross-section area actualizes high-power signal transmission. Its cable voltage endurance is 600V and maximum amperage is 30A. For noise protection, we specially developed the triple-layered shielding structure. It not only rejects internal and external noise, but also instantaneous spark noise due to vibration.
From the deep stillness of TUNAMI GPX-R, you can even sense the atmosphere of pre-performance of sound source.
In addition, we have prepared Schuko plug version, TUNAMI GPX-Re, for European and Korean users. The big impact of TUNAMI GPX-Re will be spreading out to overseas.

PCOCC copper is a material that includes very few impurities and insures very low levels of signal disturbance. Because of its low incidence of grain boundaries, the signal passes without impediment or distortion. Heating and cooling the PCOCC wire under controlled circumstances yields a densely re-crystallized, highly pure structure called a μ conductor. The resulting product with a mirror finish applied is called PCOCC-A copper. This highly advanced product is made possible by the combined application of high technology and traditional Japanese craftsmanship.

We have advocated the importance of noise protection which becomes a defining feature of power cable. Although we accomplished certain results by applying star-quad shielding structure to L/i 50 series, considering customer demands and trends, we pursued producing updated product with a state-of-art technology. For TUNAMI, we developed triple-layered shielding structure.
The first layer of this structure converts electromagnetic wave into thermal energy by interfusing electromagnetic insulator. As the second layer, semiconductor layer (carbon) is employed for its characteristic that discharges static electricity without affecting its conductor. A copper foil shielding is set as the third layer to protect the conductor from external noise. Furthermore, drain wires, closely-situated to copper foil shield, make S/N ratio higher by connecting to earth ground.

After the deep analysis for insulator, we selected polymer polyolefin that has different degree of hardness at interior and exterior to prevent negative effect by sympathetic vibration. Moreover, this material has a quarter of permittivity compared to common PVC and we paid careful attention to strengthen the cohesiveness of its insulator and conductor in order to infill random space and maintain a high-quality signal transmission.

The "Aspirin Snow White" outer cover is specially produced for the TUNAMI GPX-R. It is made from thick Polycarbonate which strength and hardness attenuate small vibrations at high speed with no added distortion due to its superior rigidity.
In order to maximize the potential of the TUNAMI power cable, the contact is modified from phosphor bronze to beryllium copper that insures the higher level of mechanical integrity and electric conductivity. And also a combination of platinum and palladium is employed as well as P/C-004. The thickness of the plating is optimally-adjusted for the TUNAMI GPX-R.