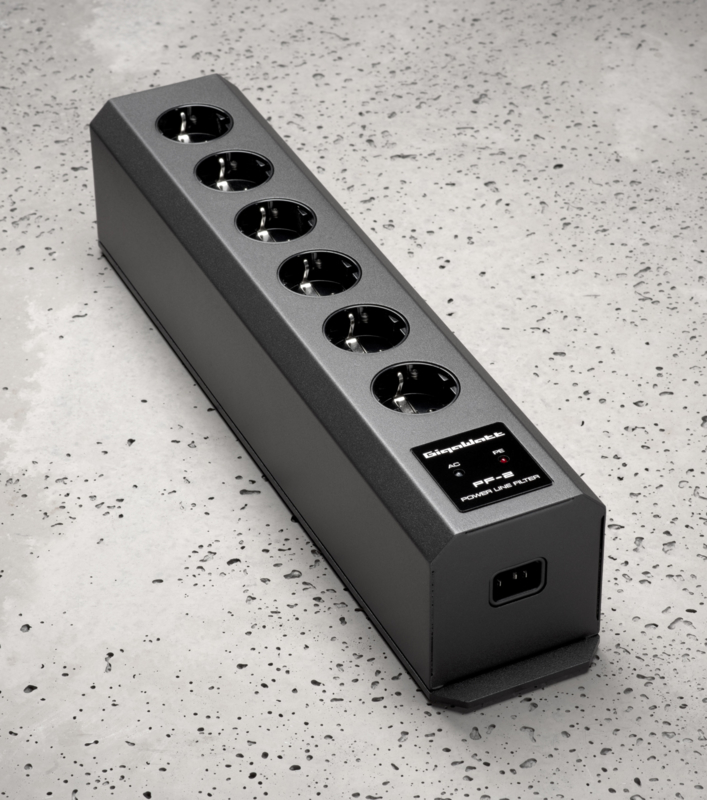 PF-2 MK2 is the improved version of the advanced filtering power strip designed to power and protect Hi-Fi audio and video systems. In the PF-2 MK2 better materials and components were used, and the modified construction of the device is based on solutions used in the EVO series of power conditioners.

The strip is made using high quality components. The distortion is filtered in a RLC filtering block. It is built using metalized polyester capacitors with low inductance and an IP (Iron Powder) filtering core. All components of the filters are soldered to a massive, double sided PCB with large cross-section of the traces, with silver solder.

In this strip we also resigned from using traditional protective elements, like wire or thermal fuses, which throttle the free flow of current to the protected circuits and by this have a negative influence on the sound. Protection against overvoltage and power surges is guaranteed by a multi-stage protection circuit, composed of plasma sparks and new generation of UltraMOV varistors. Those elements, working together with a well designed, modern power grid, warrant a complex protection against overcurrent and overvoltage.

The PF-2 MK2 uses an innovative current distribution system, being a proprietary development of the company. It is based on massive power distribution bars of 2nd generation, made of polished, high purity, cathode copper slabs (Cu-ETP). This system distributes the current directly to each pair of output sockets, using crimped and screw-tightened connections and cabling made from silver plated OFC copper wires in FEP Teflon insulation with a cross-section of 4 QMM. The use of the star wiring topology and the high conductance and massive cross-section of about 30 QMM of each of the bars warrants an equal and stable power distribution regardless of the load on any of the strip’s outputs.

The PF-2 MK2 power strip is equipped with six high quality power sockets GigaWatt G-040 Schuko, designed and manufactured by the company. The brass connectors of those sockets were silver plated at the factory, without the usage of intermediary metals, like copper or nickel, which could introduce unfavorable series resistance and voltage loss. The increased area of contact and the thick layer of silver guarantee sure contact with the plug pins. The sockets were additionally subdued to cryogenic modification and a demagnetizing process. In order to effectively protect children, the G-040 sockets were equipped with integrated anti-surge shutters (increased protection against touching, conform with VDE 0620). The PF-2 MK2 is also available with outlets of type NEMA 5-20R, used in North America and some Asian countries, and with Australian outlets of type AS/NZS 3112.

All internal elements of the power strip are closed in a double metal chassis. This enclosure is a perfectly tight shield against RFI and EMI noise. The strip is also equipped with a LED indicating proper operation of the device and a circuit indicating wrong polarization of the power line or wrongly connected grounding.

The strip is also equipped with a high quality IEC socket, allowing their user to connect any power cable. The power strip is equipped with the power cable LC-1 MK3+ with 1.5m length. To fully utilize the maximum potential of the PF-2 MK2 we recommend the usage of the LC-3 MK3+ or LC-2 MK3+ power cable.